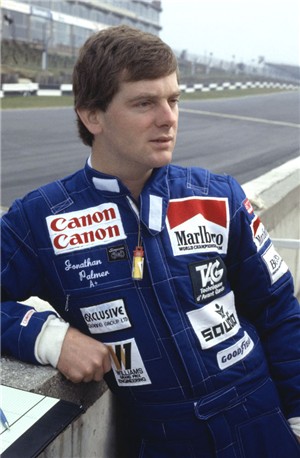 Context- nature of arrival and departure

After winning the British Formula 3 championship in 1981, Palmer was signed as Williams test driver for 1982. Alongside his testing commitments, he went on to win the European Formula 2 championship in 1983. For the 1983 European Grand Prix at Brands Hatch, Frank Williams offered Jonathan Palmer, an end of season reward guest ride in a third entered Williams for the penultimate race of the season- thereby ensuring Williams would have a British representative at a British event. It was Jonathan Palmers F1 debut, aged 26, and he would become the first British driver to race for the team in it’s current incarnation. This was the last race for the FW08C before the FW09 was launched for South Africa, so fielding a third driver again was simply not possible. Furthermore, the new Turbo powered Honda engine was to make it’s debut in South Africa, and so they needed experienced drivers.

For 1984, Williams tested Senna, and were interested in him, but had two drivers under contract with Laffite and Rosberg, so Senna made his debut for Toleman, and Palmer was picked up by RAM Racing.

By the time Palmer made his debut during the second half the the 1983 season, the Ford engine was being utterly outgunned to point that Keke Rosberg was often being beaten to pole by over 6 seconds a lap on any track with a straight on it. Laffite- often more so. In fact, Laffitte failed to qualify for both the European GP and the previous Italian GP. According to Keke everyone within the team were incredibly frustrated, having been top of the pile for 4 years and him being reigning world champion, yet now, they were effectively racing in a different category to the Turbos. This was to be Williams’ final race using the now breathless Ford Cosworth’s before switching to turbo power for the final race of the season.

If qualifying 2.5 seconds down on your teammate can be regarded as a high, Palmer still managed, on debut, to outqualify Jacques Laffite in the other Williams. Perhaps Laffite’s head wasn’t in it by that point though because there were plenty of other Ford powered car’s getting the better of him, and he was much further behind Keke than usual. But still- getting this car onto the grid on debut when his team-mate couldn’t was…something.

European GP
He brought it home- the first of out reviewed drivers to actually see a chequered flag, and on his formula 1 debut, under hopeless circumstances. He finished 13th out of 15 finishers, 2 laps down, beating Stefan Johansson’s Spirit and Raul Boesel’s Ligier, whilst Rosberg’s engine let go on lap 43.

See best. qualifying 2.5 seconds behind the lead driver, at a track Palmer knew well, as Williams test driver, vs two unmotivated teammates, and with everything to prove, that is a huge deficit.

Summary
A competent driver making his F1 debut under trying circumstances, comparing drivers who do one race is very difficult, and slightly unfair. Still, as the Williams test driver, he was familiar with the car, and yet he was constistently a long way behind Keke during both qualifying and the race. Whether it was because of this underwhelming effort or not, Jonathan Palmer spent the rest of his career racing for back-of-the-field outfits. Whilst Andretti ended his race in the barrier, and Palmer got the car home, and outqualified one of his more experienced teammates, I think Andretti showed more spark in a Williams relative to the same teammate, Keke, and so for that reason, I am erring towards placing him above Palmer on the “Greatest Drivers” list. There is nothing “great” about crossing a finish line. It’s about the manner IMHO.